At the Ethics Panel at last January’s annual 2014 SHA Meetings on Historical and Underwater Archaeology in Québec City, Canada, two of the subjects that came up were deaccessioning archaeological collections and selling artifacts. It became clear very quickly that not everyone defines these terms or views these concepts in the same way.

Several years ago, many shipwreck salvors began to adopt scientific archaeological terminology to validate and legitimize their activity in the public’s eyes. More recently, some have adopted professional museological terminology like “deaccessioning” for the same reasons: to legitimize selling artifacts. They further appear to believe that it is acceptable to sell monetarily valuable artifacts to finance future ‘research’.

These are current issues within the ongoing argument raised by salvors, and there was considerable surprise during the Ethics Panel when I mentioned that the Smithsonian both deaccessions archaeological collections and sells objects as well. I noticed some audience members near the front grabbing their notebooks and starting to write.

Perhaps I should explain. For decades, there’s been a tale circulating that the Smithsonian never gets rid of anything once it’s reached “America’s Attic,” but it’s not so. We deaccession things all the time. Formally speaking in the museum world, deaccessioning is a polite term for getting rid of something that has been accessioned, or cataloged into a museum’s permanent collection.

At the Smithsonian’s National Museum of American History (NMAH), the process is lengthy and involved. First a curator proposes the deaccession of something in his/her collection. There could be several reasons for such an action: an object might be made of plastic that’s falling apart; an object might be a duplicate in worse condition than another example; an object could be outside the scope of the collection, it could be an intricate object missing critical pieces, etc. If the estimated value of an object or collection under consideration for deaccessioning is valued over $10,000, an independent appraisal is required, along with approval from the central Smithsonian administration; the higher the estimated value, the more outside appraisals and higher-level administrative oversight are necessary, all the way up to our Board of Regents for items valued at $500,000 or more.

The curatorial proposal goes through one’s supervisor to the Registrar’s Office and is then distributed to the entire museum’s curatorial staff for review. The curators have 30 days to concur with or question the request, or express an interest in taking the material(s) proposed for deaccession. The proposer is required to respond to all inquiries. If reviewing curators do not respond to the deaccession action within the time limit, their concurrence is presumed and the action moves forward to the Collections Committee (CC), which reviews the proposed action and curatorial responses. The CC then recommends an action to the Associate Director for Curatorial Affairs, who makes the final decision. The Director’s Office may be consulted as well, if the matter is perceived as potentially controversial.

The point here is that there is a formal and lengthy review process with multiple checks and balances, to ensure that the right decision is being made, widely reviewed, and confirmed at several levels regarding objects in the collections.

Once the NMAH deaccessions something, it is first offered to other Smithsonian (SI) bureaus. If no other SI museum or research center wants it, then it might be destroyed; transferred to another government agency; given to a non-profit educational institution (normally another museum); repatriated; or sold at public auction.

Here’s an example. Back in the 1960s, NMAH underwater archaeology curator Dr. Mendel Peterson recovered archaeological material from several Bermuda shipwrecks. He also worked at various sites in the Florida Keys and the Caribbean. Peterson brought the recovered artifacts back to Washington, DC for conservation, research and display in the very popular Underwater Hall. 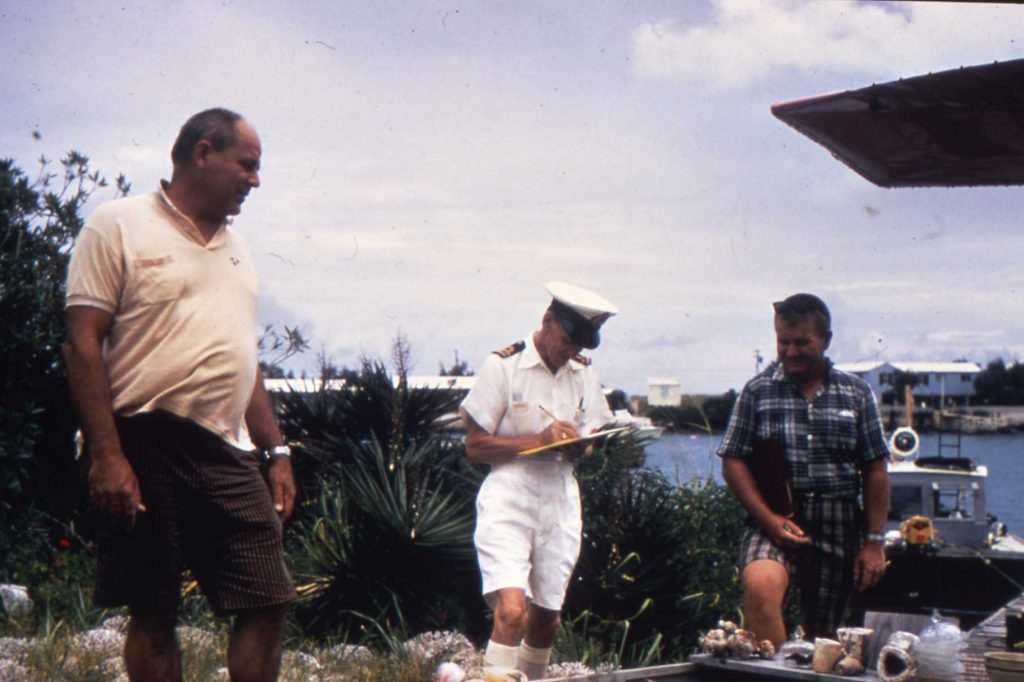 Interest in these shipwreck materials dropped off sharply after Peterson’s retirement in 1973 and the 1983 closure of the Underwater Hall. Although they had been conserved, very few were displayed in the following decades. The occasional research inquiries about the artifacts nearly always led back to the associated artifact assemblages still in Bermuda at the Bermuda Maritime Museum. The Bermuda Maritime Museum (now the National Museum of Bermuda) had lots of materials from these same wrecks, collected when Peterson was active there.

As a result, the NMAH decided to repatriate the Smithsonian’s Bermuda shipwreck collections to the Bermuda Maritime Museum, so the collections could be reunited, studied and displayed in their entirety in the place they were originally collected. A local archaeologist was contracted to assemble and inspect the entire Bermuda collection and develop a report listing the materials. They then were formally deaccessioned by the NMAH, following which they were offered to the other SI bureaus. When a few expressed interest in some of the artifacts, they were informed of the integrity of the Bermuda collections and the intent of the deaccession action; they subsequently withdrew their requests. The Bermuda Maritime Museum then came to Washington, packed up the artifacts and returned them to Bermuda. Now the artifacts from the several wrecks have been reunited with their associated materials as complete assemblages available for public access, research and display.

Relative to the sale of artifacts, there have been two significant public auctions of NMAH objects in the last 20 years. However, neither of the two collections in question were formally accessioned into the collections of the NMAH. In both cases, they were unaccessioned duplicate or out-of-scope artifacts. UNaccessioned, not DEaccessioned: these were things that had never entered or been cataloged into the SI collections. And in both cases, the Smithsonian had permission from the donors to separate out unwanted and duplicate items and sell them for the benefit of the institution. That’s a condition we seek before accepting a very large collection, in order to avoid donor issues later on.

The first was the C.B.H. Jackson collection of arms and armor. When the unwanted material was offered to other Smithsonian bureaus, some of the most valuable specimens in the collection—some Greek Bronze Age armor and weapons from Luristan in outstanding condition worth well over $1 million–were claimed by—and transferred to—the Smithsonian’s Natural History Museum next door.

The second was a Pennsylvania auction of duplicate and out-of-scope maritime and firefighting objects from the CIGNA Corporation of Philadelphia, donated to the NMAH in 2006. An example of the sorts of things in the CIGNA auction was multiple models of the 18th century American frigate USS Constitution (Old Ironsides). They were all made from kits with varying degrees of proficiency and accuracy, and the NMAH already had two accurate, museum-quality models of the same vessel. With no need for extra examples, the NMAH elected to auction them.

In accordance with Smithsonian policies and general museum standards, all proceeds from these auctions went into dedicated funds for the purchase of objects for the Museum’s existing collections. And now, with the ever-tightening federal budgets diminishing, the NMAH has funding sources for the acquisition of new objects for the national collections, which provide opportunities for both filling gaps in the current holdings as well as strengthening existing collections. Incidentally, until they are used, dedicated funds for purchase lie in investment accounts, which reinvest half of their income back into the principal to account for  inflation.

In summary, the difference between salvors stating that that they are ‘deaccessioning’ artifacts to sell for further research and a nonprofit museum deaccessioning artifacts either for transfer or sale is pretty substantial. And that’s the way it likely will remain, for the two enterprises are on opposite ends of the spectrum. One exists to make money for its employees and investors, and the other exists for education and preserving public access. One is a for-profit, and one is a non-profit.