Wednesday the 30th of September

Deep Thoughts » The United Nations: The Decade of Ocean Science

The United Nations has proclaimed The Decade of Ocean Science for Sustainable Development (2021-2030) with the intent of bringing together ocean stakeholders worldwide with a common framework. The Intergovernmental Oceanographic Commission (IOC) of UNESCO is mandated to coordinate the preparatory process for The Decade and has invited the global ocean community to plan for the next ten years in ocean science and technology. The impetus is ensuring ocean science can fully support countries in the achievement of the sustainable development goals. This important effort to awaken nations to the increasingly desperate situation of our oceans, immediately necessary and critical, and provide an avenue for educating the public about the importance of maritime heritage and increasing protections for archaeological sites. The Secretariat of the 2001 Convention on the Protection of Underwater Cultural Heritage has been called on to ensure that the IOC understands maritime archaeology as one of the key ocean sciences and includes this aspect in the Ocean Decade. 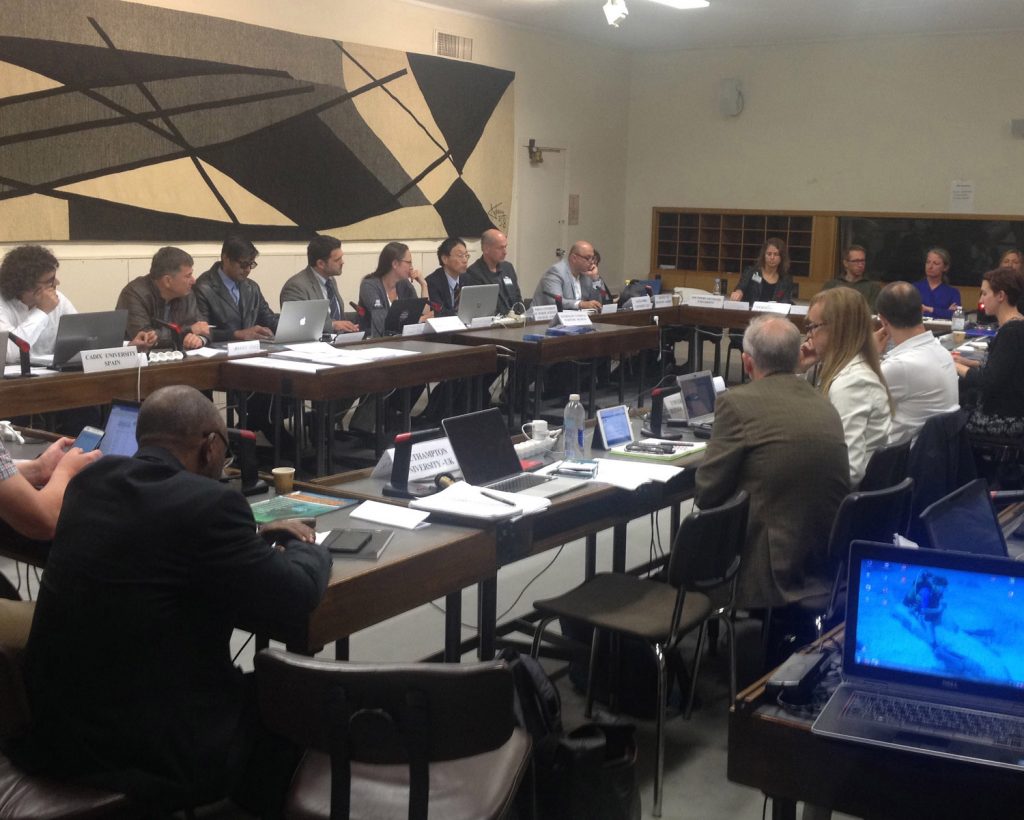 UNITWIN members at UNESCO discussing collaboration on the Oceans Decade.

Awareness of the importance of the oceans for sustaining life on this planet has been growing over the past two decades as news of the extreme pollution, islands of plastics, and acidification of the seas has been given attention in the media. Also garnering attention has been the disturbing near collapse of global fisheries, intensified endangerment of marine mammals, and the decline of vital coral reefs that are habitat for most of the ocean’s species. Of equal significance is the increasing activity of sophisticated treasure hunting consortia encroaching on cultural resources and the erosion of protections for submerged historic and prehistoric sites of scientific and archaeological importance that were instituted to guard against such incursions.  Governments, especially of smaller or economically stressed nations where regulations are weak or enforcement of protections lax, are routinely targeted by salvage groups with promises of quick solutions to economic problems. 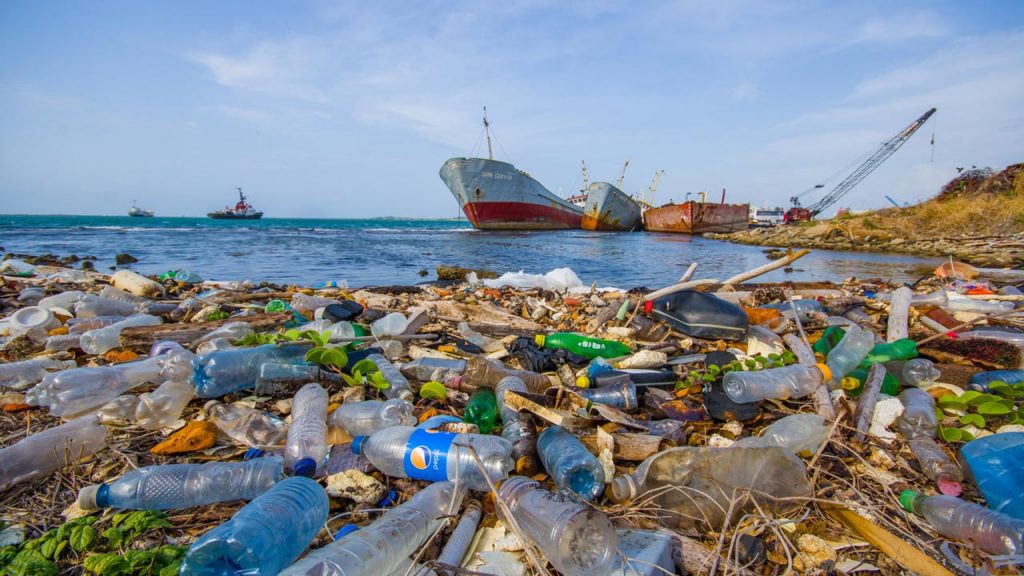 Plastic trash in the oceans and waterways presents a danger to the environment and humanity.

The opportunities during The Ocean Decade for the ACUA and the other NGOs accredited by UNESCO actively engaged in ocean sciences are far reaching and profound. By marshaling expertise in maritime archaeology around the world the independent NGOs can capitalize on the anticipated media attention this UN action will generate. Nautical Archaeology is a marine science of long standing with a stake in the ocean environment, and strengthening public awareness of our shared maritime heritage will pay dividends as the constant struggle to protect cultural resources continues. Even more than other marine sciences, archaeology connects with people emotionally. Linking underwater archaeology to efforts to preserve ocean resources may position the ACUA to broaden its role.  We are an advisory body, after all.  Protection of submerged cultural resources, such as shipwrecks, which frequently are found in reef zones, also by extension represents a step toward reef protection. Linking with other marine sciences is not out of bounds for nautical archaeology. There have been many successful unions of marine archaeology and marine biology carried out by different institutions and these could serve as models to be promoted. 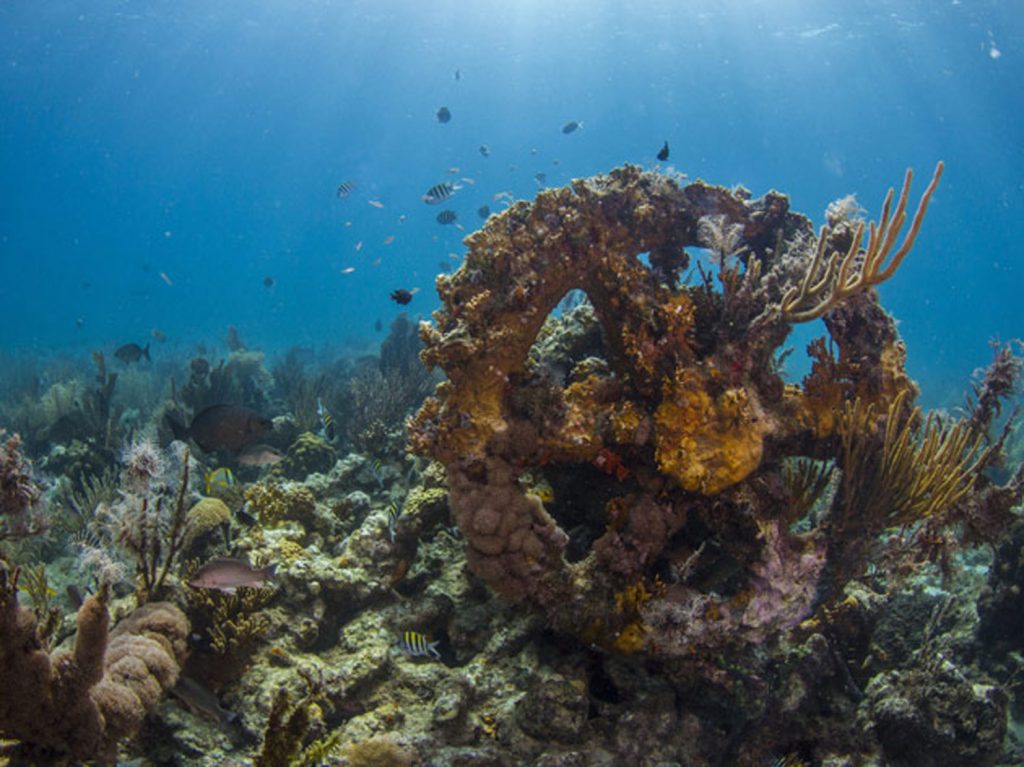 The oceans are the world’s largest open air museum of human cultural interaction. The oceans have linked civilizations for millennia. Submerged cultural sites along coasts and waterways, shipwrecks spanning centuries, and fisheries that historically sustained maritime communities are all threatened by the combined forces of unchecked human enterprises, indiscriminate waste disposal, and rising sea levels resulting from global warming, to cite only a few problems. These threats are further exacerbated by political actions that fail to recognize the value of maritime cultural resources or its economic value or create artificial animosity between groups that might otherwise be partners, for instance, pitting those with interests in costal economic zones against preservationists. UNESCO will have its hands full. It is easy to single out whales, dolphins, or other iconic marine mammals for protections owing to the powerful emotional pull they exert on the public consciousness. It will be harder to address plastics disposal, dynamite fishing that imperil reefs, or stressing the value of a shared heritage of the seas.  However, action is underway. Already increased communication and coordination among the accredited NGOs is occurring with the first ever UNESCO sponsored meeting exclusively for the NGOs party to the 2001 Convention, scheduled for December 2018. The objectives include developing a unified message concerning the protection of submerged cultural resources as a key element of the Oceans Decade.

The issue I want raise here is what the ACUA can do and what the ACUA can achieve by embracing a leadership role in the Oceans Decade.  The ACUA is an important resource of expertise and experience in nautical and maritime archaeology, and is in a unique position to provide input to the media on the issues. The ACUA is already in a powerful position as one of the most senior organizations with a track record of engagement. The ACUA should be proactive by preparing media information packets for ready distribution; by increasing its media profile; by increasing its visibility as an advisory body; and by developing outreach programs that extend beyond the confines of academia.  Treasure hunters and consortiums ignore academia and appeal to the public imagination of “pirate loot” and sadly have significant media support in television, the internet, and magazines. It will be increasingly necessary for the NGOs and for the ACUA to reach out to the public with messages that are less academic or wonky, and more attuned to emotional and social interests of the public. The ACUA should of course continue to communicate with legislators and policy-makers, but only by fostering public opinion can these efforts gain momentum or strength.   Members of the public with whom I have spoken recently generally do not associate the oceans with history or the loss of coastal land from sea level rise as endangering cultural resources. It is for us to educate the public through outreach in various media venues. The ACUA need not do this alone but can facilitate existing maritime programs everywhere in the United States with local outreach efforts.  We may never successfully counter the lure of “pirate treasure,” but we don’t have to. We need only to offer a different narrative that is just as strong—demonstrating how protections of cultural resources benefit us all.

Some years ago the Arctic received considerable attention owing to UN sponsored actions. School programs followed arctic explorers on treks across the ice, connected with arctic peoples, and incorporated arctic ecology into environmental studies. Similar approaches to Ocean Science can have equal impact.  There are numerous details that will need to be assessed, of course, before such an ambitious undertaking can gain traction, but failing to educate the public of the significance of maritime archaeology during the Ocean Decade is not an option. There is too much at stake. This is a call to action that the ACUA will need to address at its next general meeting and in the future as we enter the Ocean Decade.