This year exiting things are going on in Mexican Underwater Archaeology. Work is being carried out in different areas of the country, from the Yucatan to the Baja peninsula and diverse types of context are being studied, that range from early settlers of the Americas to XX century wrecks. Notably there is the work being carried out by the project “Hoyo Negro” led by Pilar Luna and an international team of archaeologists and explorers that are shading light on this mysterious part of prehistory. There is also the project: “Maritime Archaeology at the port of Acapulco” that is studying the port with a maritime landscape approach, as well as other interesting projects.

However, during a field season this January at the Isla Margarita, Baja California, a team of the Subdirección de Arqueología Subacuática (Underwater Archaeology Office) of INAH (National Institute of Anthropology and History) in collaboration with Dr. Koutaro Yamfune of A.P.P.A.R.A.T.U.S., managed to get a series of recordings of wrecks using photogrammetry. This technique of recording archaeological sites is now being applied to the work being carried out in Mexico. The work was made possible by a grant by the National Geographic Society and the Waitt Foundation. It is clear from the results that the traditional way of documenting wrecks can be improved by this technique and it is clear that this technology is becoming quickly a new standard. Not only is recording extremely precise, it also very good in reducing drastically time to record, saving money and getting better results. As all technologies, it does not apply well in some specific site conditions. Nonetheless, when possible to apply it is of amazing help. 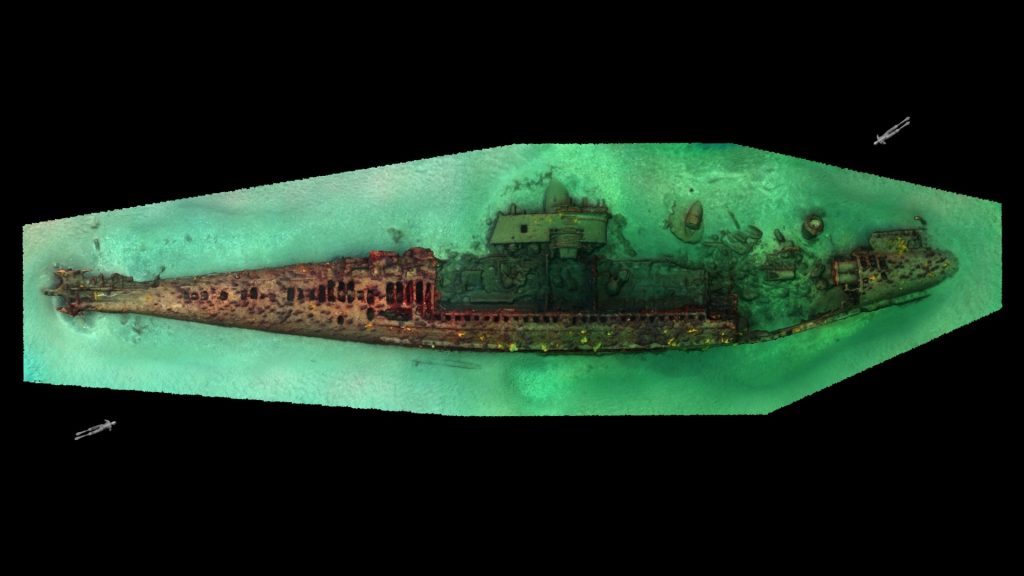 USS H1 Seawolf that sank in the waters of Baja California in 1920 while navigating towards California. Photogrammetry by Kota Yamafune.

On this January´s expedition, one of the highlights was the wreck of the American submarine USS H1 Seawolf that sank in those waters in 1920 while navigating towards California. The USS H1 a veteran of WWI, beached in the southern part of the island. Recovery efforts were undertaken and when the sub sank to 15 meters and it was sold for scrap, but never salvaged. The submarine was forgotten untill 1997 when it was rediscovered, but it was in 2014 when fisherman took divers to fish and realized it was a wreck. Unfortunately, the fishermen started to steal brass parts. After two years, we arrived and began to spread the message of the importance of preserving UCH. From the first visit to the site, the mission became to record and preserve the wreck for future generations of the nearest fisherman community of 400 people some 20 kilometers away introducing the concept of responsible tourism as means of gaining extra money, after all, this is the only known submarine that can be dived in Mexican waters. The USS H1 was a 150 feet long vessel that could make 10 knots underwater with diesel-electric engines. It had capacity of holding four 18 inches torpedoes. Taking the necessary photos to prepare the 3D model took a day and a half of work and some weeks in the processing. A version of the work can be seen at: https://sketchfab.com/SAS-INAH. Currently we are preparing a printed 3D model to leave at the local school for children to know and eventually protect the ship from looting. 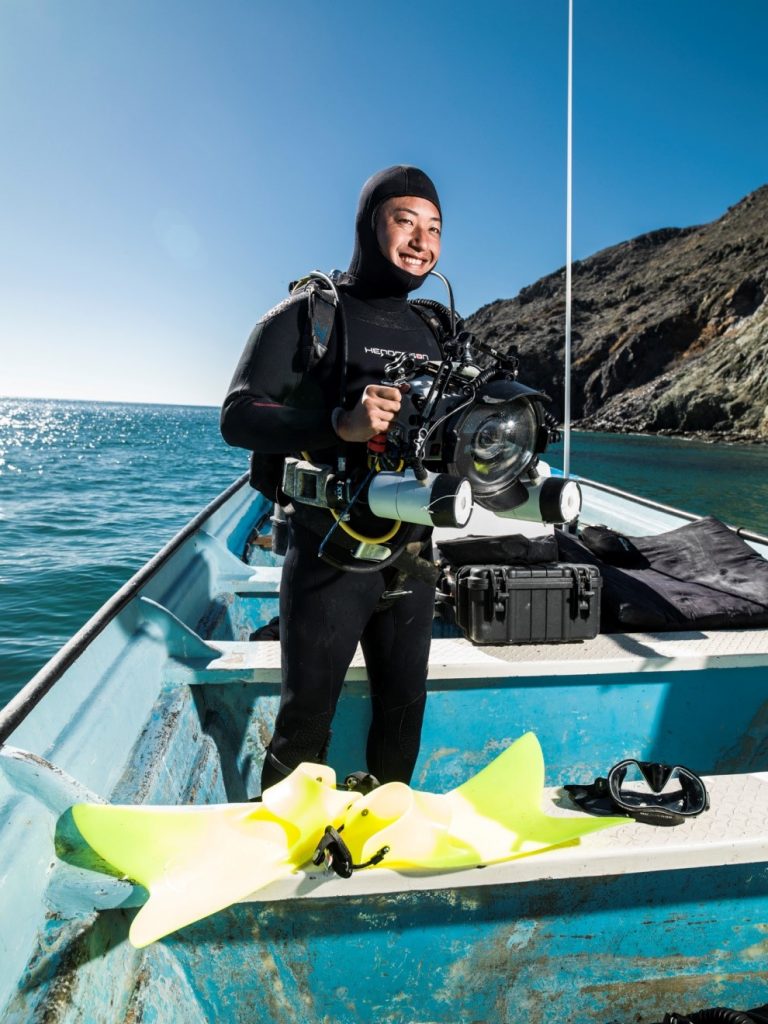 The other ships recorded during the season were the SS Colombia, and the SS Indiana. The first was a large steamer of 14,000 tons of the Pacific Mail Company that ran aground on a rock close to shore in 1931. Of the ship the large four boilers are there, as well as some of the engine parts. Two large anchors were found as well as a admiralty style smaller one. The ship is scattered and several parts have been destroyed by the salvage company and also salvage operations throughout time that have been lured by the cargo it was carrying. Most has been salvaged,  if not all.

So far, we have not been able to locate much information on the SS Indiana, but we can say she was not a large ship of the 20th century. Many of the names live on in the knowledge of local fisherman. Although the expedition was looking for the remains of the SS Independence that sank in 1853 on route to San Francisco, we were not able to locate the ship, but have a clear idea of its whereabouts in the area. We will go back to locate the ship this winter. 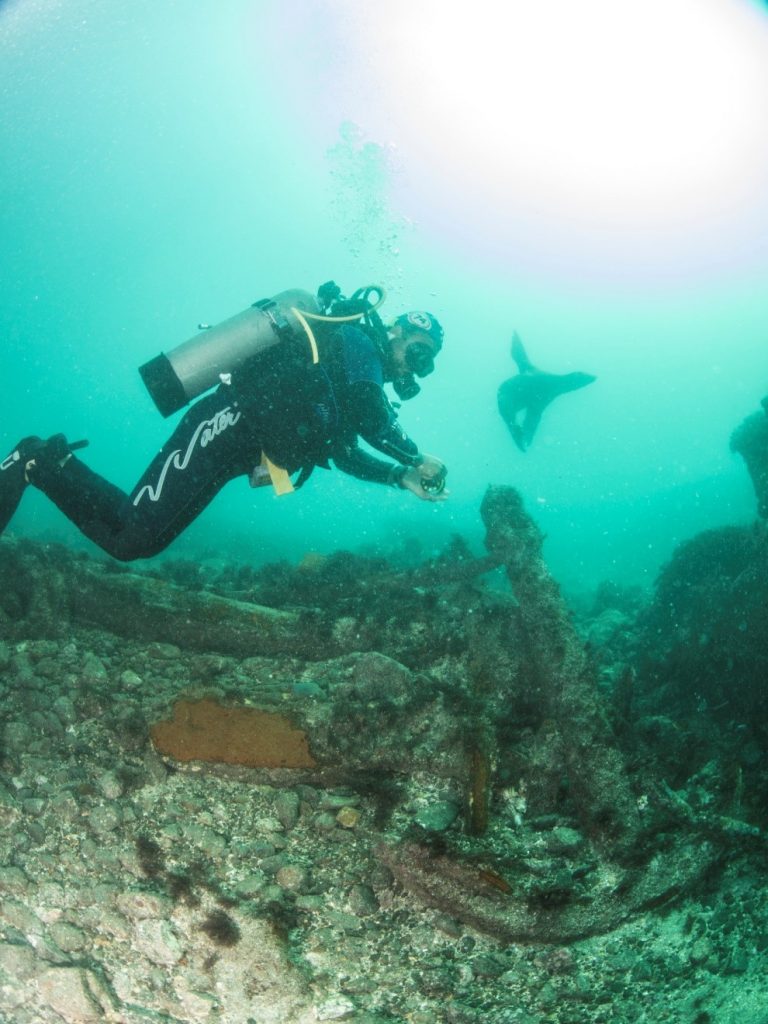 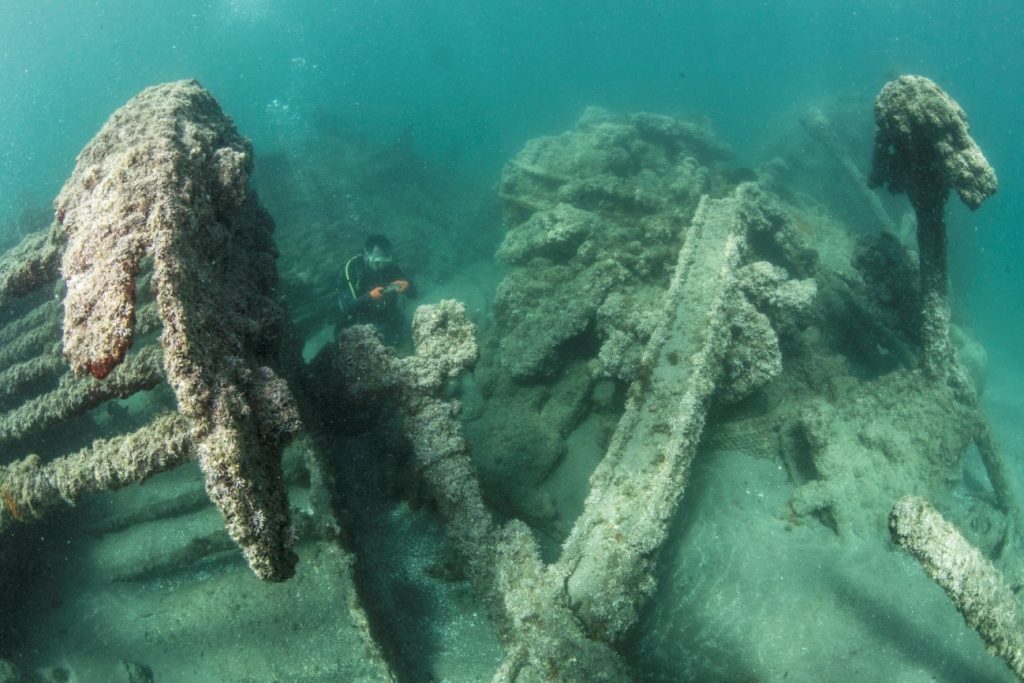