Deep Thoughts » A Matter of Ethics: By Della Scott-Ireton

As part of the advising mission of the Advisory Council on Underwater Archaeology, we have developed an Underwater Archaeology Ethics Press Kit (PDF). This document is intended to answer and clarify some of the most common questions and misconceptions pertaining to underwater archaeology. Presented in short, concise “sound bites” of information, the kit is meant to be a resource for journalists, reporters, and others needing accurate information about the goals and purposes of scientific archaeology in a submerged environment. 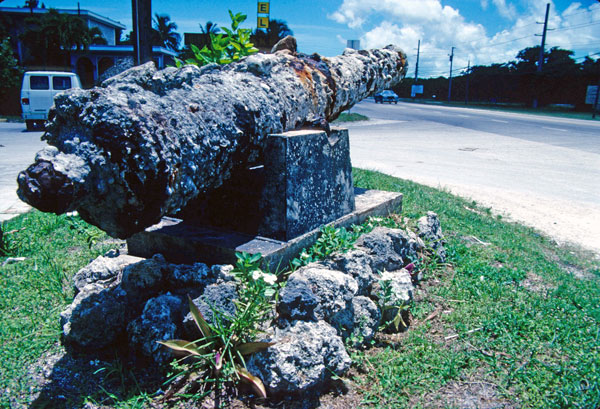 Historic cannon from the 1733 Spanish Plate Fleet wrecked in the Florida Keys. Salvaged by treasure hunters in the 1970s and never conserved, it now is rotting on the roadside (photo by author).

The kit grew out of a regular discussion topic among the members of the ACUA. Over the years we all have been approached by television reporters and newspaper journalists covering stories on shipwreck discoveries and treasure hunting. In most cases, they didn’t understand the difference between legitimate archaeology and commercial exploitation of the underwater cultural heritage.

And really, there’s no reason they should understand the difference. They didn’t go to school to be archaeologists, and for years the media has painted treasure hunting and scientific research with the same brush. Archaeologists have, overall, not focused as much as they should on educating the public about the value of and need for heritage study and preservation, whether on land or under water. The result is the vast majority of the public gets everything they know about archaeology from Indiana Jones and they think that what he does is, in fact, archaeology (not that I’m knocking Indy for sparking interest in archaeology, but honestly, aliens with crystal skulls? that’s just sad).

The further result is that companies engaged in the commercial exploitation of shipwrecks for financial gain can hire people they call “archaeologists” to “oversee their work” or to “use archaeological methods” and the public doesn’t know the difference. The reality is these “archaeologists” cannot be listed on the Register of Professional Archaeologists because they engage in the destruction of our heritage for commercial reward. Their work is driven by profit rather than by legitimate research needs and they are destroying information and knowledge about our maritime past in the process.

We hope the Ethics Press Kit will prove useful for reporters, students, interested members of the public, and those wanting to learn more about the foundation and purpose of archaeology. It’s not the things we find, after all, it’s what those things can tell us about the people who made and used them. An anchor in its original location on a shipwreck can tell us whether the ship wrecked while moored or while sailing, and if the sailors tried to save themselves or if they were taken unaware. An anchor in front of a bait and tackle store tells us nothing except that iron rusts. If you’re a diver, would you rather see that anchor on a shipwreck, covered in coral and surrounded by fishes, still in place where it fell on the sea floor? Or would you rather see it rotting away on the roadside? Ultimately, it’s up to us – all of us, not just archaeologists and cultural resource managers – to decide what is an acceptable fate for the relics of our heritage.